Development Dimensions Inc. (DDI) captured three “Best of Show” awards from the American Society for Training and Development (ASTD) in a three-year period.

With a lot of teamwork and high-quality “boothmanship,” they used the services of CHOPS performer Gary Jesch to attract attention, and Exhibitgroup Giltspur’s booth design, construction and management abilities. DDI’s booth staff, sales and marketing people pulled it all together with careful attention to detail. 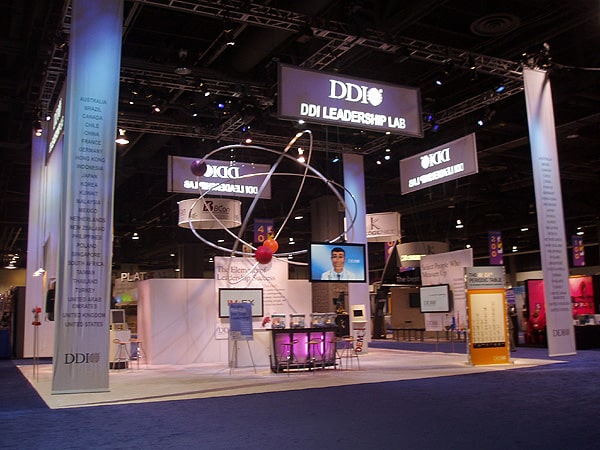 The booth was awarded “Best of Show” first at the ASTD event in Washington DC  in 2004, where “Doctor D” held court from a plasma screen hanging from overhead truss, above an “oxygen bar” in the center of the booth. 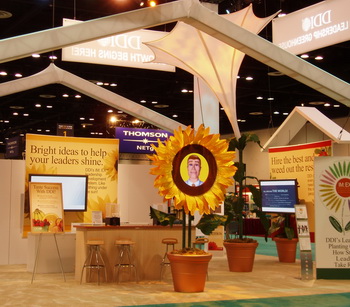 In 2005, the character was renamed “Sunny,” and placed inside a giant orange daisy prop where he was the center of attention, particularly among attendees with cameras, at the Orlando Convention Center.

In 2006 in Dallas, “Sean the Star Maker” appeared among light stands and road boxes in a design themed around Hollywood movie stars, and pulled people into the unique booth. 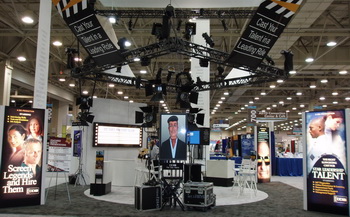 The main reason for using the live animation was to capitalize on Gary Jesch’s ability as a performer to make an immediate and personal connection with attendees as they approached the booth, and then to qualify them with a little dialog regarding their needs and how those needs might be best served by DDI.

DDI’s booth staffed noticed that there were several other benefits to using the technology when it was well-integrated into the design of the booth. It created a buzz on the show floor and increased the amount of time people spent in the booth. The booth staff had fun interacting with the character and their customers. The leads turned out to be more solid and significant to the sales staff at the conclusion of the shows.

Many show attendees were attracted by the bright colors of the booth and encouraged to use their cameras to take photos with “Sunny,” and the other versions of the avatar Brash, said a DDI spokesperson. That helped with social media goals.

As a result, DDI earned a reputation for going “all-out” at the show, both with their spending on the booth and the resulting design and implementation. The booth was never boring and had much more impact, making it an easy decision for the ASTD to give its award.