New York City event entertainment specialist Geoff Cohen of Gem Multimedia produced one of the most unique coming-of-age parties ever held in New Jersey a few years ago.

It featured CHOPS, a live, interactive character appearing on a big screen right behind the DJ. And for the most part, Cohen performed as CHOPS himself, from a backstage area where he couldn’t be seen. 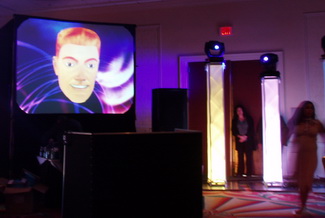 While the party had several other unusual components that made the kids really enjoy the celebration, they were fascinated with CHOPS, especially when he apparently knew the subtle but important details of the event. As parents looked on, Cohen provided an entertaining and engaging experience that involved storytelling, humor and mystery.

While bringing CHOPS to a bar or bat mitzvah is a high-ticket decision, the young girl’s family was serious about doing something so different and unusual that it would not soon be forgotten.

Cohen established the necessary trust with the family during the planning, and they were not disappointed. In fact, at the end of the night, they said they were impressed and got more than they expected.

Cohen had performed as part of the CHOPS team at a previous event in Philadelphia. However, this was his first experience with the new “Digital Puppeteer” system that delivered accurate lip sync without using motion capture.