Utility company engineers watched in amazement as Dr. Cal, (aka Prof. Millennium) interrupted an important presentation by Elster marketing manager Dave Buster. There was a palpable pause hanging in the air of the San Antonio hotel ballroom. 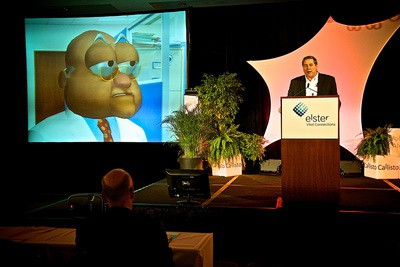 WHO WAS THIS MYSTERIOUS CARTOON CHARACTER?

Buster was describing a new software solution for digital power meters when Dr. Cal tried to take over. To the delight of the audience, his demeanor fit the event perfectly and his timing was spot-on.

Dr. Cal was played by Gary Jesch, from a closet near the hotel ballroom, as part of a production headed by Doug Edelson of Feats, Inc. and crewed by Doug Kerswell’s GMS Media. His first appearance on the stage screen was with Joe Orlando, an Elster Solutions executive, who introduced Buster.

Dr. Cal’s job was to start out cynical at the beginning of Buster’s demonstration of the new software, and then be convinced and changed at the end. The Callisto software created by Elster to monitor meters and provide data management went over very well with the Elster clients who attended the event in San Antonio.

Orlando said using Dr. Cal as a comic relief helped deliver something complex in a way that improved acceptance and created a buzz.