Fountain of Fun on Valentine's Day

As party guests went from the living room to the giant tent in the backyard, they passed through the owner’s office and library, now outfitted with a rear projection screen where CHOPS appeared. 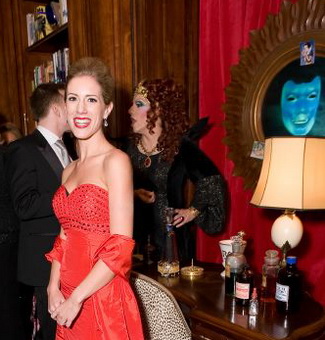 Fountain’s chief producer Arriane Nichol found a beautiful antique gilded round frame, just the perfect size to hold our Bubble Screen material. We set the Digital Puppeteer system up inside the owner’s office and mounted the screen and drape in the doorway, to interact with guests, tell jokes and bring something completely new and different to the event. The first year was a “storybook” theme and Nichol asked us to come up with a “Man in the Mirror” character.

We’d done a similar character for two other large companies, so we modified CHOPS to be a high-tech version. An actor in drag portrayed the Evil Fairy Godmother, a perfect counterpoint to the interactive avatar. 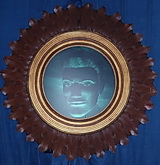 ZEUS AS THE “ORACLE OF THE INTERNET”

We used the same screen and frame the second year, creating a version of CHOPS we called the “Oracle,” and he told guests’ futures. This highly mysterious experience was a focal point of the party and lasted for about four hours, with guests returning again and again. One of the most fun aspects was remembering the guests’ names as they returned.

A NEW TYPE OF CHARACTER – THE NIXON EFFECT 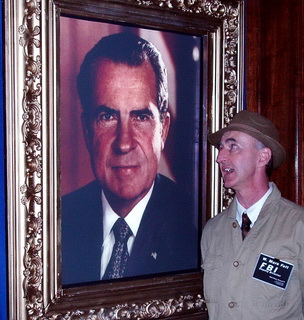 The third year, the event’s theme was “politically incorrect,” so we devised an animated version of the presidential portrait of Richard Nixon, and came up with a new way to make his mouth move. His front man was an actor impersonating “Deep Throat,” and our Nixon impression turned out to be a very popular element in the party. Of course, the room where Nixon appeared was “bugged,” with inflatable critters and files left hanging open.

KUDOS FROM ALL INVOLVED OVER THE YEARS

At the end of our three years of service to the California couple, they were so gracious and kind about our contribution to their parties over the years. We also received appreciation and thanks from Robert Fountain, Nichol and the rest of the event crew. Fountain is a leading special event designer and producer in the San Francisco area.