A week-long marketing promotion in Bogota, Colombia demonstrated that using live animated characters is a powerful way to catch the attention of an entire city, in the hands of an effective production team. 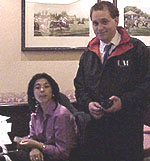 Using the high-tech tool of performance animation, TORO Agency (D’Arcy Masius Benton & Bowles) President Christian Toro and VIP Eventos Producer Juan Pablo Neira took on the challenge, and succeeded with a smash hit, that took over the city in a week-long media blitz like none other.

In two months of careful planning, the team designed 15 appearances in seven days by the avatar Cybrina, now cast as “Mariela Futur,” the housewife of the future and spokesperson for Proctor & Gamble’s new liquid detergent, Ariel.

First, the actress who would play Mariela was chosen – Alexandra Montoya, a radio personality and humorous impersonator known by many. Alexandra’s voice was recognizable, which made the whole thing that much more intriguing to the agency’s target audience, young housewives in this large South American city who shopped at the “big box” stores. Alexandra’s consistent handling of Mariela and professional skills were outstanding.

At the opening night, a product launch party was staged by VIP Eventos, featuring Mariela, along with Proctor & Gamble dignitaries and Bogota spokesmodel Paula Turbay, a former Miss Colombia.

A 10-station TV media blitz followed, where the trio of Neira, actress Montoya and Live Animation Producer Gary Jesch moved the Digital Puppeteer system from one station to another, and performed real-time interviews which were recorded for post-production and integration into the station’s news programs.

In one program at RCN, the city’s biggest and most popular station, Mariela was positioned in the set by chroma-key overlay with three regular actors doing their normal weekly show. Moments before the show was due to air live, the director recorded a quick interview with Mariela that culminated in her giving one of the personalities a “cyber kiss,” complete with eyes closed.

Three days of in-store appearances were planned for the end of the week, putting Mariela in giant supermarkets on payday, where she would interact with families in the grocery store aisles, telling them about the merits of the detergent, and getting them to try it at home. “Open the cap and smell the quality of the product inside,” she said, coaching the housewives who scooped up the bottles as fas as they could be supplied.

The final element of the campaign brought the Digital Puppeteer team to a local broadcast studio where a live infomercial starring Mariela would be presented during prime-time TV.

At the wrap-up meeting comprised of Proctor & Gamble managers, TORO agency managers, VIP Eventos JP Neira and Live Animation’s Gary Jesch, everyone agreed that the consistent, flawless functioning of the Digital Puppeteer while moving back and forth across Bogota from event to event, was the key to the success of the campaign. The team effort of drivers, crew and the careful advance planning all went into the accomplishment.