Philippine children living in Manila or visiting from nearby islands learned more about the marine world surrounding them, in visits to the Virtual Reef at the Nido Fortified Science Discovery Center at the Mall of Asia.

A CHOPS character called “Mister T” was there since the center opened in Oct. 2007 to entertain and interact in real time with his many guests. 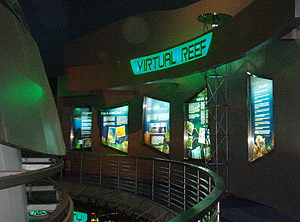 VIRTUAL REEF IS UNREAL YET CAPTIVATING

The Virtual Reef was created in a room with video projectors and stereo speakers rather than water and fish. People saw the reef through the eyes of underwater videographers.

At one end, near the exit, there was a rock formation that framed an unreal and captivating reef scene, occupied by a large cartoon version of a Titan-fish calling himself “Mister T.” He spoke with the children and answered their questions, while his performers worked from inside a small space and watched via surveillance cameras and heard via hidden microphones.

Not surprisingly, kids asked the strangest questions of “Mister T,” so he really had to be on his “fins” with the answers.

Not only did the kids have a great time, they also posted their videos of interactions with “Mister T” on YouTube and Facebook. The owners offered plush toys of their character that could be purchased in the gift shop.

CHARACTER CREATION WAS A COLLABORATION

The addition of “Mister T” to the Virtual Reef experience was the brainchild of Leisure Entertainment Consultancy, which built the center (then called the SM Science Discovery Center) and its technical project managers and designers at Artistic Entertainment International, Inc. We assisted with the technical portion of the live animation project and brought in our illustrator/designer Steve Gray and 3D animator Tom Knight to produce the character on our system. The Titan-fish is a well-known denizen of Philippine waters.

NO KNOWN DOWN TIME OF OUR SYSTEM

It took about a week to install our components and train a small group of performers to use the Digital Puppeteer to animate “Mister T.” We taught them the basics as well as how to get a good feel for what’s going on in the minds of the guests they were entertaining. The animation components of the system had been running steadily without any calls or service requests. The exhibit was retired in 2013 after a five-year run.

Here are a couple of the videos their guests made during that time: