Most people would never expect to find something like McDermont Field House, a sports and entertainment destination in California’s Central Valley. Originally a fruit packinghouse, it has been transformed into a state-of-the-art, 172,000 square ft. venue where families can spend time together, be active and have fun. 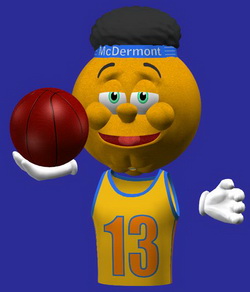 SQUEEZE IS MASCOT AND GREETER

It’s also home to “Squeeze,” an interactive avatar whose job as mascot and guest greeter has kept a small staff busy since June 2008. “Squeeze” is the creation of illustration artist Jaren Fisher and Brad Henry, one of the original project managers who founded the facility.

HE POINTS OUT THE OBVIOUS

When someone enters the McDermont House’s old-time lobby, “Squeeze” is there to welcome them and provide directions to all the various things it has to offer. His white-gloved fingers point the way, and he has a variety of accessories that he can make appear, such as boxing gloves or birthday balloons. He appears on a 60-inch flat screen in the lobby, and can also be connected to the many screens around the facility to make announcements that are either live or on-demand.

Henry thought “Squeeze” would add some of the same interest to the facility’s prestige and world-class offerings, similar in drawing power to those found at Disney’s Epcot Center and the Disneyland California Adventure theme parks. While Lindsay is not well-known in other parts of the country, its multi-million dollar rec center attracts thousands from all the towns between Sacramento and Bakersfield, California.

Installed in 2008, the Squeeze exhibit is rarely used these days due to budget constraints, we’re told. Still it’s considered a visionary attraction by most of the Lindsay community, and ran smoothly, without any issues, for many years. We do remember them calling us because the nib/point of their pen wore out after about three years of heavy use. That was a $10 fix.

Our thanks and appreciation go out to all those involved with bringing live animation and Squeeze to McDermont.