Marley Cleans Up At Sanitary Show

The sanitary supplies industry show in Las Vegas ISSA 2011 attracts facility managers from around the world every year to the Las Vegas Convention Center. This time, they were greeted by a brightly-colored animated fish discussing water conservation in the Rubbermaid Commercial booth. 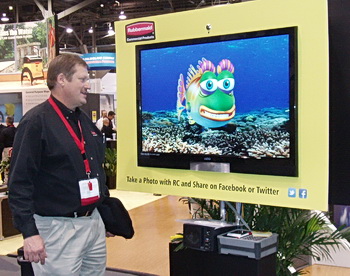 And they got an even bigger kick out of it when the fish started speaking in Spanish to them, welcoming to the booth and asking if they were aware of such features as a no-flush urinal. The cartoon fish, named “RC” appeared on a large screen along an empty aisle in a 40×50 booth designed by The Rogers Company. Such a large booth has many elements going on at once, so RC brought a point of focus to the Rubbermaid booth experience and then turned it over to the Rubbermaid dancers three times a day.

Inside the closet where he ran the RC performances, Gary assisted with the music cues and announcements for the dancers as well as interacting with prospects for eight hours a day. This is a pretty normal shift for a trade show event and we assure our clients we’ll be there for them the entire show, without a major break.

One of the highlights was when Neil Eibeler, president of the Rubbermaid Commercial division, decided to relieve Gary and take over the duties of the Digital Puppeteer for about half an hour. Gary showed him quickly how to run some of the controls, and he did a very entertaining performance as the voice of RC himself, surprising many Rubbermaid colleagues and some customers in the process.

Dozens of attendees used their cameras to get photos with RC and posted them to Facebook. Good thing that Rubbermaid Commercial put its logo on a frame around RC’s video screen. This is a good way to stimulate sharing of branded images from the trade show booth, with the customers, the avatar and booth staff all getting involved.