Catch Their Eyes with Shaped Screens

To an audience expecting rectangular shapes, round cut-outs are very effective 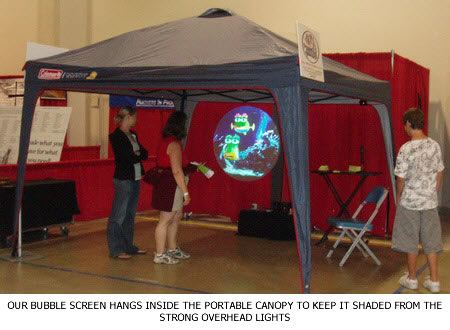 The Bubble Screen is a display system designed by Gary Jesch, to help catch attention along the aisle of a trade show booth. It can be either free-standing, as shown in these pictures, or built into an exhibit space. 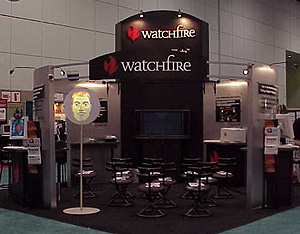 One of our stand systems is adjustable in height, and takes up about a 2×5 ft. space, including the projector and stand, the speaker/stand, and the screen/stand component.Typically, the screen is about six feet off the ground, with the speaker and projector directly behind it.

Small details are important – such as making the color of booth carpet the same as the color of the aisle carpet, so there is no border on the floor to cross. People are just more inclined to stand on the outside of the line. In the case of the Bubble Screen, we’d like to see people stand about three feet away, for the best interaction. 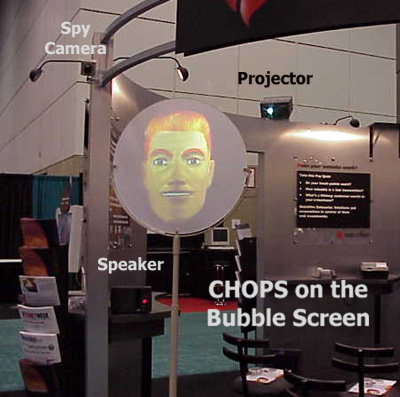 The Bubble Screen stands are now powder-coated semi-gloss black, giving them a stylish, discreet appearance that looks good in any booth.

There are no wires going to the screen itself. The screen is very bright, can be seen from all angles, and can be photographed. Our dark screen can be seen clearly from a hundred feet away in a well-lit indoor environment. Sunlight is the only thing that seems to affect its brightness.

Here are some pictures of its use at various venues. The cream color stands were changed. In photos where CHOPS’ picture is washed out, it’s an indication that the screen is substantially brighter than the rest of the booth. In real time, the screen is a bright, intense video image. 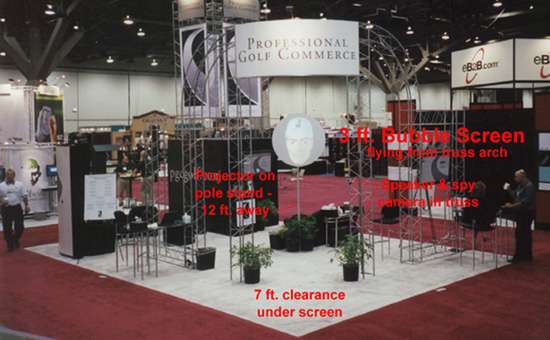 This image of the PGC booth shows a 3-ft. diameter Bubble Screen. It’s hanging by clear line from the truss. In this booth set-up, it seemed like the screen was a little big and a little high off the ground for really good face-to-face interaction. In the photo at the top of the page, “My Fish People” we’re entertaining children at the Nevada State Fair on the same screen, so it was lowered to eye level and placed under a canopy to darken the space a little. The two-person control system is behind the red drapes, concealing the performers.

We’ve also experimented with transparent screens for this application, but found them unsuitable because our guests could see the background behind the screen, which might have included a company logo or something. The transparent screens are fine when you can control what is behind them, but that is rarely possible at a trade show or conference.

The live animation control system where the performer works takes up about a 5×5 foot space, and is hard-wired to the display device. It can be anywhere in the booth, but it makes for an interesting attraction to get people to stop and come in the booth, where we can start conversations.