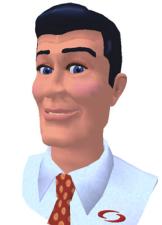 How do you like your virtual characters – a little “Brash,” perhaps?

This character was originally designed and produced by Gabreal Franklin of All Planet Entertainment, and utilized first for Synplicity, Inc. at the DAC Conference June 1998. Since then, he has appeared many times. We call him Brash because he really comes alive in a funny and exciting way that attracts crowds to a tradeshow booth, building consistent traffic. He also looks great up on a big screen at corporate special events. We’ve customized him to wear a suit, lab coat or polo shirt so that he can fit in with just about any theme or event.

“Brash Landau” – the next Walter Cronkite? 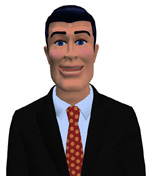 Move over, TV anchorman – Here’s your next competition, a really good looking TV personality who never needs a haircut or makeup, and who is always ready to deliver the news with a real punch.

Created and owned by Gabreal Franklin, executive producer of All Planet Entertainment in Santa Cruz, Brash/Adam first debuted at the 3D Design Conference Awards Presentation in San Francisco and left a great impression there, in fact, about ten of them. He does Jack Nicholson, Bill Clinton, Jimmy Stewart, John Wayne and Ross Perot, just to name a few. Next, he performed as the spokesperson for Synplicity, a software company in the San Jose Area.

You might imagine him as a dapper gameshow host rather than a newsman, and that is OK, too. Next in the plans for the character, All Planet has agreed to occasionally license him for other appearances on a case-by-case basis. But if you like Brash, and think he’ll do the job for you, just ask us. Our people will get with his people and they’ll do lunch, right? After all, what’s a good looking guy like Brash going to do without an agent? 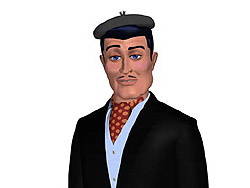 Recently he appeared at an annual conference for the Society of Nuclear Medicine as “Otis” for Technology Imaging Services, and our client liked him so much, they made us promise that he would be available for the next annual meeting.

Brash has had some exposure, but it has been limited to just a few industries, and we think that could work for you. He’s new, fresh and not over-used, and can be booked at the same rate as CHOPS, when using Gary Jesch to perform him. Give them a try and you will see what we mean.

For a short time, the marketing manager at Greenway stepped in and took over the controls of Brash at a recent HIMMS conference.