CHOPS - The Cyber-Dude with Attitude 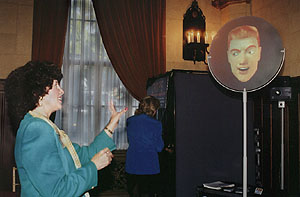 Some people say he reminds them of Max Headroom, while others think of the Wizard of Oz. Either way, CHOPS will win his way into your heart and immediately grab the attention of tradeshow attendees or an audience in a corporate meeting. Here’s more on CHOPS – our most popular character.

CHOPS is pure “animation at face value” – a disembodied head with a penchant for puns, people and promotion. Some of the press described him as a barker on a video display, where he can interact with passersby from his outpost in 3D space, able to discuss anything with them in a fun, knowledgeable way. 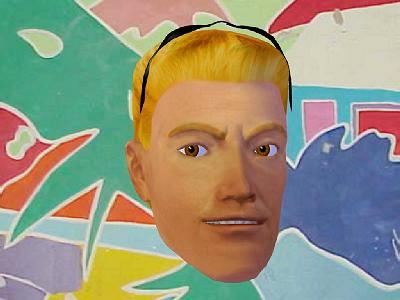 However, CHOPS shows a surprising amount of business acumen and sales savvy, plus he rarely takes a break. At tradeshows, he is known for working from the opening to the closing minutes, with only an occasional five-minute break.

He prides himself on remembering names, too. The second and third day into the tradeshow, he’s greeting people by name and making friends on behalf of the company he represents. He’s a gregarious fellow, equally at ease with engineers and sales staff, but he’s smart enough to know when to shut up and let the prospects do the talking.

For the most part, CHOPS’ words are the promotional messages the client wants expressed while working with the producers at Live Animation. CHOPS will mix it up with a few jokes, a little jab here and there (but never painful) and a little winking and smiling. It’s that irrepressible fun-loving attitude that keeps people around, wanting to hear what he’ll say next.

Recently, we developed the artwork for a ballcap for CHOPS, where we can place a 3D logo for our customers. The logo reinforces the brand message and gives CHOPS that sharper-than-ever image during his performances. We are often asked to modify his looks slightly as well as to give him a new name for that job. This is the character we call “Virtual Vinnie,” a spin-off of CHOPS wearing a ball cap.