She's a dream to work with and knows her stuff

VirtuaLibby – Live Animation’s first full-bodied virtual character is ready for the stage and she is uniquely “perfect!”

Introducing VirtuaLibby, soon-to-be everyone’s favorite cyber human. And she has the looks, people-skills and intelligence to prove it. What’s on this unique virtual character’s mind these days — besides being a popular spokesperson for America’s top businesses and companies? She represents break-through virtual technology — and she’s what’s next on the horizon from CHOPS. See what VirtuaLibby has to think and say in her premiere CHOPS interview! 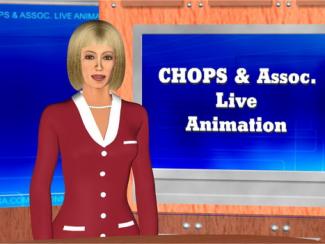 VirtuaLibby is an interactive avatar –– complete with a healthy, toned body, a modern appearance, and a professionally-designed wardrobe. Computer-generated and displayed on a video screen or projected into thin air by a special projector, VirtuaLibby becomes an intelligent and sophisticated 21st Century celebrity — a vision of the future, when there will be many others like her.

She can perform as a confident spokesperson or master of ceremonies — just like “CHOPS” himself, that “cyber-dude with an attitude,” created by Gary Jesch, a multimedia producer and founder of CHOPS & Associates.

“VirtuaLibby is a futuristic CHOPS creation –– she represents leaving the old millennium behind and looking the future squarely in the eye, to another time when our own world will be populated with other cyberhumans with a range of magnified talents and abilities. She is beautiful and professional, and she is fast becoming a popular asset to businesses who want to successfully convey their sales message,” adds Jesch. One of her most recent and successful appearances was as “Julie,” who appeared on-stage for Nikken at the Anaheim Convention Center. 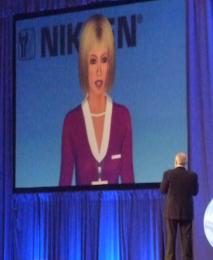 Like “CHOPS,” VirtuaLibby can see people, hear them and discuss the latest news, interactively in real time from a screen, whether it’s a video monitor or a projection system that makes her 20 feet tall. She is poised and whenever she appears, she is the center of attention. Sometimes she gives out information and sometimes she sells or advises customers on how to use good judgment in purchasing or planning their marketing programs.

She is a woman who is generous and thoughtful, yet knows what she wants and won’t take no for an answer. She is sophisticated, feminine and is dedicated to the people who have the most confidence in her – and her ability to be a company spokesperson or representative. And she has a lot to say about what is happening in her life today.

In fact, she was recently interviewed by our Las Vegas correspondent, Christine Datian.

Datian: This is the best time of your life, isn’t it?

VirtuaLibby: Being here with my other CHOPS friends and with you is really the best time.

Datian: You really seem to be happy now. How have you liked working for CHOPS & Associates?

VirtuaLibby: I’ve liked every minute of it. They really brought me to life, you know. Tom Knight, a talented 3D artist from Imagination Works in Redondo, Beach, CA, created me, based on a real person at the end of 2000. He had been working with CHOPS & Associates for the past five years, creating their 3D artwork for their other characters.he works out of his studio at the beach.and through his excellent work, he and Gary Jesch, the founder of CHOPS & Associates, became good friends. I was Tom’s original design, his creation, and I am grateful for his belief in me.

Datian: Your appearance is rather unique? How do you stay so attractive and healthy-looking? 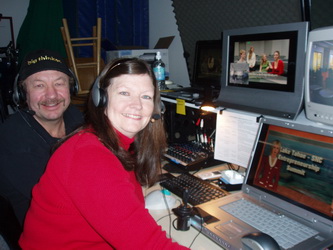 VirtuaLibby: As a cyberhuman, I am lucky, I guess. I will never change, that’s one of the intriguing benefits of being a 3D character. I am a computerized artwork come to life.a vision of the present and the future. I don’t age, isn’t that wonderful? No plastic surgery needed here. No time-consuming workouts at the gym. My looks will stay the same but, of course, my hair, makeup and clothes may change, depending on the corporate event I am asked to host.

In fact, international fashion designers can now take their creations into the virtual world of the Internet and show their latest designs using virtual characters like myself. I could appear at major fashion events in New York, Paris and Milan, for example, on the runways or at fashion shows, dressed in a number of the season’s hottest new outfits, talking to the designers and customers. That is really exciting. I am totally computerized artwork combined with pure glamour, a futuristic notion of beauty in the 21st Century. 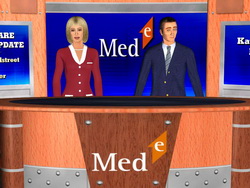 Datian: Isn’t that something? Bringing artwork to life?

VirtuaLibby: Consider for a minute history’s famous painters and artists, Michaelangelo, Titian, Rembrant, Van Gogh, Renoir, Picasso, who have all tried to capture a woman’s beauty and character in marble, on canvas, or in modern times, with photography. Tom Knight has done all that with 3D sculpting.

VirtuaLibby: At first, Tom Knight developed a wire frame version of me, or his vision of me, and was able to rotate it in real time on his computer, looking at me from all angles. He moved the points to come up with a piece of artwork, giving me the looks and characteristics he envisioned for a modern cyber model. CHOPS & Associates combined his vision and creativity with real time animation — and I am a product of their union. That is what makes VirtuaLibby so new and attractive, combining painting, sculpture and computer graphics into one modern discipline. Bringing an artist’s vision to life, that is the creative vision that Tom Knight and Gary Jesch share as my co-designers. 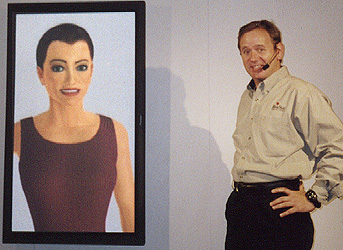 Datian: I heard your debut was a real show-stopper. Can you tell us more?

VirtuaLibby: Yes, I appeared in Orlando, Florida on June 13, 14, and 15, 2001 at the Orange County Convention Center at Sapphire 2001, hosted by SAP, a German software and business products company.

VirtuaLibby: It’s an annual conference, attended by 8,000-10,000 people. Our client was BlueStar Solutions from San Francisco. Richard Dupell and his colleague, William Hall, at Fratelli Bologna worked with Gary Jesch in the past and suggested me to Mindy Zuckerman, a San Francisco-based producer, who was designing a presentation for the BlueStar Booth in Orlando. William Hall was the presenter of the Fratelli Bologna script and Barbara Scott was the actress behind the scenes, performing me. My name for this event was “Star.” I worked at the booth, promoting ASP services for SAP Associates, and interacted with William Hall, about the products and services of BlueStar. It went over really well. 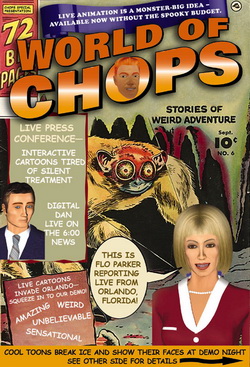 Datian: Your possibilities seem endless. Where are you off to next?

VirtuaLibby: There are new plans in motion all the time. I know Gary has been planning on using my character at upcoming corporate events. The possibilities are amazing, I agree with you. I can appear virtually anywhere. My character represents another step forward in technology in performance animation because of the level of complexity and realism. In fact, I am the first 3D character in Live Animation’s history to show my whole body, from top to bottom. It’s all in the design. There are limitations, though. To change my clothes requires some expense, but I am designed with a professional spokesperson’s dress and wardrobe at all times.

Datian: As the newest star at CHOPS, do you read your reviews?

VirtuaLibby: Yes, the reviews have been great. And I have been really happy with the things that have happened for me this year. Being the “Super Cyber Model” of the 21st Century is quite a responsibility, but I am up for the challenge.

Datian: How can new companies contact you to serve as their spokesperson?

VirtuaLibby: CHOPS & Associates books performances from 1-5 day events and creates custom 3D characters for animation on the CHOPS 3D system. If your business or tradeshow exhibit needs a new look and feel, it’s a very easy technology to add without changing the booth. If your next meeting needs a “new face” to liven up things a bit, contacting CHOPS & Associates is a guaranteed success.

VirtuaLibby: As VirtuaLibby, I would be happy to help your business add to its bottomline success.