Virtual Mark Twain is alive, well, vigorous and published in the 21st Century

Reports of his death are still exaggerated, even in the new millennium. What keeps this American favorite alive and well? The 3D Digital Puppeteer, for one! VMT gets a new look, more flattering than ever. 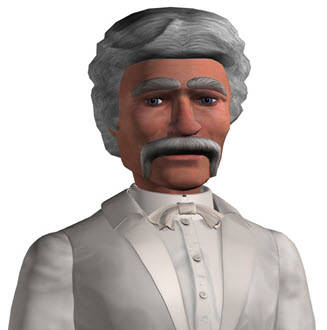 The most famous man in America in 1900 – About one hundred twenty years ago, Mark Twain traveled the lecture circuit, a much-loved American author and humorist who captivated audiences with his slow drawl and homespun stories. Now, thanks to virtual reality and live animation technology, plus the skills of a very able presenter, Virtual Mark Twain is back to restore the memories.

VMT debuted in New York City on the birthday of the real Mark Twain in 1993 at the Virtual Reality Expo. The city had never seen anything like it – a 3D version of Mark Twain who spoke just like him, who knew the stories and the people that made Samuel Clemens so famous. Behind the scenes, the actor and producers did their best to recreate the man and the feelings that people once loved so much.

We share the sense, along with Twain fans, that Twain is really at his best as an educator rather than a pitchman, and we know that someday, the price will be affordable enough to get him into the classrooms of America and the world, where he can continue to offer his much-admired view of life in his own timeless fashion. Meanwhile, we continue to offer him as a spokesman for an older generation, with the values and dreams of a country on its way to maturity. Since his passing 100 years ago, much has happened and we would have to wonder – what would he have to say about Facebook, Twitter and Congress today?

We like the juxtaposition of Twain in an era of telegraph machines and gas lamps, to the modern times of the Internet and supersonic jets, because we think that human nature hasn’t really changed all that much. Maybe Twain’s delivery is a little slow compared to today’s TV commercials and video bites, but sometimes it’s nice to slow down a little and smell the flowers, or figure out the joke.

If you’d like to give Virtual Mark Twain a try, let us know. You can hear his delivery of some of the old stories and decide for yourself if it is appropriate for your next presentation. It just might be.