Cartoon Dog Speaks Up For All Pets

Pooch barks up the right tree - for a change 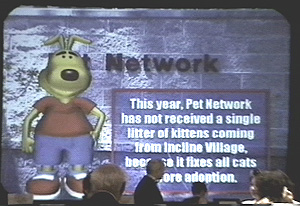 Everybody loves cartoon dogs – After working on realistic people as characters, we turned to a new challenge, in response to a request by our friends at Pet Network for a new mascot. It wasn’t long before Pooch came into being – a 3D cartoon character with a human voice and a doggy attitude.

Pooch isn’t your ordinary cartoon dog, though. He’s able to see, hear and speak with his audience in real time, even from the stage of a special event. 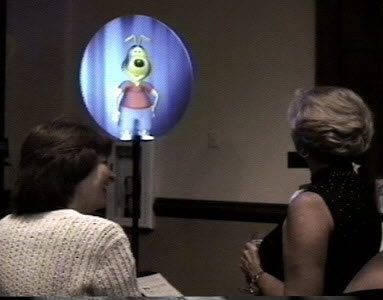 For Pet Network, that was just right. They needed a way of drawing attention to a silent auction at their annual gala night, the “Fur Ball,” held each summer in Incline Village, NV. We volunteered to support the event with Pooch, and the night turned out to be a big success.

Pooch is amazing when it comes to supporting the non-profit organization, Pet Network. His appearance at the “Fur Ball” was enough to send attendees into fits of laughter while he educated them on the fine points of pet ownership, voicing the concerns of all his dog friends who can’t speak.

Pooch appeared at first on the Bubble Screen near the silent auction, where he discussed the fine points of the valuable gifts and auction items. After about half an hour, he turned up on a big screen (rear projection system) to entertain the audience of about 400 with a True/False quiz to test their knowledge of pet care, rescue and Pet Networks’ efforts in the community.

His image was layered on top of a Powerpoint presentation written and created by Jesch, based on interviews with the managers of Pet Network. His delivery of the questions and answers was smooth, funny and educational.

Future plans include uses at community functions, involvement with local pet care chains and stores to promote pet rescue, and corporate tradeshows. He is quite good with children in the audience, and is lovable and intelligent. He is man’s best friend, after all.