This virtual grandfather has seen a lot and never gets older 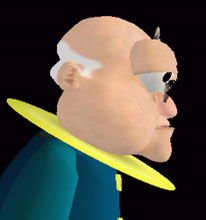 The Dean of Cyberspace appeared on a big stage for Aetna Healthcare in Orlando, telling his “students” about the upcoming improvements to Aetna’s marketing approach. His name was “Dean Applegate,” and some called him a cross between John Houseman and Spacely of the Jetsons. We called him a success!

An executive producer came to us a while ago, with a sketch on a scrap of paper. “We have an idea for a character,” he said, “but there is just one small problem. We only have about three weeks at best.” His answer came in the form of a character we now know as “Dean Applegate,”or “Professor Millennium, originally the spokesperson for Aetna Healthcare.

The Dean appeared on a big stage set by way of a rear projection system, and was able to participate as a key part of the show. He was performed by Curt Karibalis, an actor with extensive experience on stage and in tradeshow booths, doing corporate theater. Curt had his lines in front of him while he worked backstage, thanks to the teleprompter work of Ansonia Teleprompting of NYC. He sat right alongside digital puppeteer Gary Jesch, who was able to communicate directly with the producer, Jonathan Cohill of Criterion Communications and the rest of the crew from Media Stage. 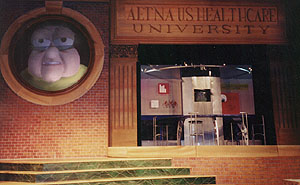 When the director needed to throw the Dean a “line,” they simply passed word to Jesch, who gave it to the actor, all “on the fly.” Together, the team delivered a flawless performance for the Aetna people and received >appreciation and kudos in the process.

If you are thinking of a project like Aetna’s, just give us a call. You’d be surprised at how quickly and effectively we can make it happen for you, and how we can eliminate the hassles of using a high-tech entertainment form like live animation.

Here are some other ways we’ve used the Professor character – 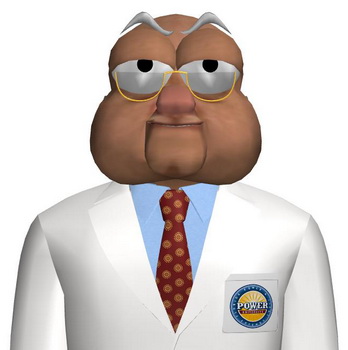 Jesch and the Prof did a ten-show tour of Florida a few years ago, hitting several major Florida cities more than once to speak with tradeshow attendees on behalf of Florida Power and Light. Working with Left Communication, the tradeshow coordinator, Jesch helped FPL sales staff draw attention to energy efficiency programs throughout the state of Florida, especially at public buildings and large facilities. 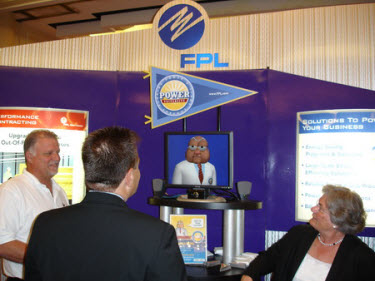 Wally – “The Kids’ Talking Wall” – Wally was created to be the host and MC of a monthly special event held at the Carson Mall, to entertain children and teens and pass along messages of goodwill and cooperation. Some of his videos can now be found on YouTube. 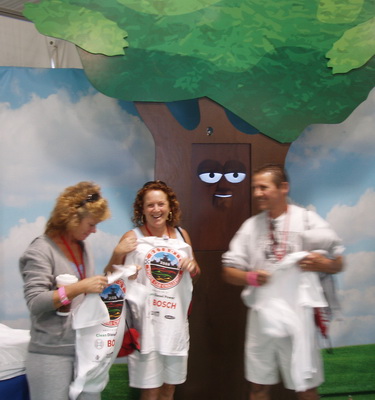 And in Detroit, we turned the Prof into a talking tree named Woody, and he helped give away thousands of sample T-shirts at the Detroit Gran Prix auto race. The designer of this booth created the prop and left a space where a flat screen was mounted. Prior to our trip to Detroit, we configured Woody to fit the space and gave him a color and texture that matched the painted prop. He was displayed at high resolution and our software allowed us to rotate the image in the computer to fit the “portrait” positioning of the graphics.

Gary Jesch performed as Woody from a secret area of the tent, while booth helpers kept the people and the T-shirts flowing. There were plenty of photo opportunities and the marketing people were very happy with this presentation method that had not been seen before. While Woody gave T-shirts away, he spoke about the advantages of diesel to help preserve the ecology and Bosch’s role in that. Bosch is a Germany-based provider of automotive and truck engine ignition parts and technology.