Every Christmas, he makes his list and checks it twice

With the arrival of the New Millennium comes an update of a familiar old image – St. Nick of the Network. He’s got his smartphone with GPS, the apps the elves wrote and a Wifi hotspot on his sleigh, and he is still checking to see who’s naughty and who’s nice.

For a riotous company Christmas Party, talking to SyberSanta or emailing your wish list, the holidays mean more fun than ever! 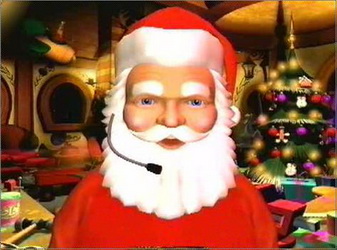 The legends and stories of Christmas span the entire world, entertaining children with the magic, awe and wonder of a fantasy character that comes alive once a year in December.

Live Animation has brought our favorite character of this time of year to life, where he can now operate his toy delivery occupation via the Web and the Internet, modernizing just like everyone else. It wasn’t so long ago that elves and reindeer made up his staff, until his favorite elf, Bob, came up with the idea of moving it all to the Web.

Now, Christmas-related web sites are a dime a dozen, but there is only one SyberSanta Claus, who can come alive and interact with children and adults from live locations like company Christmas parties and special events.

These high-resolution images are actual screen captures from our Digital Puppeteer, created at 1024×768, and reduced to a smaller JPG file in a matter of seconds.

We expect that the idea of updating the jolly old soul will catch a few folks off guard, as they hang onto their own special memories of Christmas, but we think that there are new generations on their way who can appreciate our sense of humor and love of this favorite character of all time. 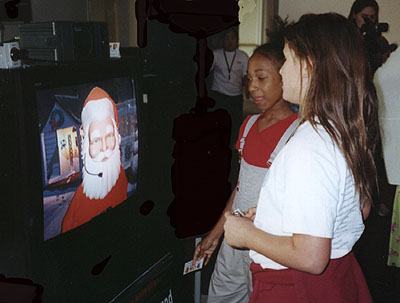 The image below is one example of how the Bubble Screen can be used with an armchair to accommodate children who want to interact with him. SyberSanta also works well on plasma screens, and even big screen TVs, as shown above.

The actor who performs as SyberSanta, Gary Jesch, is hidden in his Digital Puppeteer control booth, in a nearby room, but he can see and hear his audience via a hidden “spy” camera.

Live Animation’s booking management is now accepting reservations for SyberSanta appearances for this Christmas season. We recommend that you get your Christmas Party lined up soon, complete with one of the most interesting virtual hosts of the holidays.