AstraZeneca was looking for ways to improve engagement in their trade show booths. Getting the attendees’ attention and bringing them into the booth was expected to be difficult. The nature of the audience – professional psychiatrists and doctors – made things difficult. The company had important information, and faced restrictions on what could be said in presentations.

AstraZeneca and their ad agency, Ogilvy Healthcare, turned to CHOPS to create two custom characters to be placed on opposite corners of the booth, catching traffic in both directions. CHOPS positioned its brand ambassadors out front, interacting with the attendees and the avatars. After the initial show in San Francisco, the client went on to book CHOPS and its avatars for seven more healthcare trade shows over the next 16 months.

Working with Gary and the CHOPS team was an incredible experience. CHOPS exceeded our expectations, increased traffic to our booth and made the overall experience fun and exciting. Can’t wait to do it all again.
Karissa Laur

Many more unique qualified leads were collected in three days of exhibiting than the previous year.

Custom interactive avatars greeted and welcomed the doctors into the booth from flat screens mounted on towers near the aisles. They started conversations with ice-breakers and handed them off to the booth’s sales staff.

Gary Jesch, executive producer and performer, followed requirements set by the client and agency  in terms of what could be said by the avatars

The actors were able to see, hear and speak with the doctors in attendance, and were still able to offer provocative content. The attendees were attracted to the booth where the CHOPS ambassadors would chat with them, and then lead them t 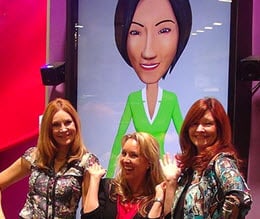 o the most effective section of the booth for their needs. They could also break the ice for the client’s sales staff.

The interactive avatars created a buzz on the trade show floor and drew hundreds to the booths, making it challenging for the booth staff to keep up with demand.

AstraZeneca’s trade show schedule involved some other products and healthcare related trade shows. They were able to extend their initial investment in the avatar character creation over a total of eight shows and 16 months. Jesch and the same CHOPS team produced all the performances, including one weekend where two shows were running in different cities. In that case, the male character performed in Washington DC, while the female character drew people to the booth at the show in Orlando.