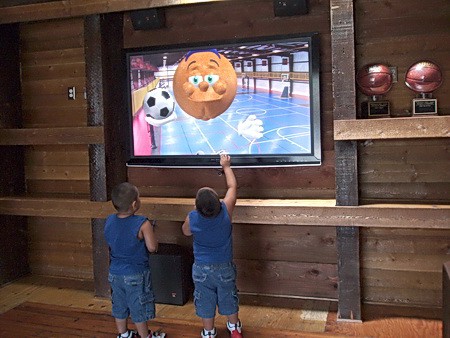 At family entertainment centers and theme parks, interactive characters can have conversations with guests that just aren’t possible otherwise. These characters can entertain during shows, help people pass time in lines, serve as greeters and mascots and help sell plush toy products in the gift shops.

ATTRACTIONS THAT PAY FOR THEMSELVES

Theme park owners want attractions that will be popular for their guests for several years and that will bring about a return on investment. Virtual characters are based on low-cost computer graphics systems using video displays and audio equipment. In fact, the biggest investment after the initial character creation and installation is in the human resources needed – actors and actresses that perform daily from a behind-the-scenes location.

AS POWERFUL AS “TURTLE TALK” WITHOUT THE HUGE PIXAR PRICE TAG

However, it’s been proven by several theme parks that audiences want to have interactive experiences like this, and that they want to buy merchandise based on the characters. One of the most successful examples is “Turtle Talk with Crush” by Disney in Orlando, where a live animation of “Crush” from the movie “Finding Nemo” interacts in a darkened showroom that leads directly into their gift shop. Disney is also running a Monsters Inc. live cartoon show there.

CHOPS & Assoc. currently has two customers with permanent installations of Digital Puppeteer systems – one in Manila at the Mall of Asia in the Philippine Islands and one in central California at the McDermont Field House – a sports recreation facility run by a community. Both were installed in mid-2007 and 2008. 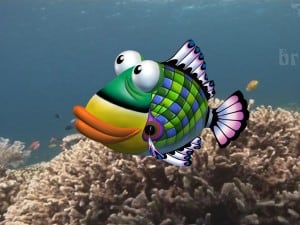 At the Mall of Asia, there’s an attraction called the Science Discovery Center with an experience called the “Virtual Reef,” where the character “Mister T” explains about the undersea world. Its performers are young men in their 20s, who speak to children from behind a closed-in closet, and see them via surveillance cameras. A change of ownership closed down this exhibit in 2013, but it ran without any technical issues or support incidents the entire time. 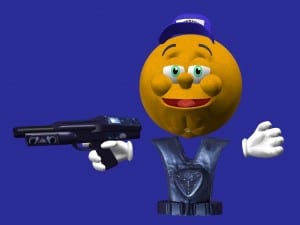 In Lindsay, California, the greeter at the McDermont sports facility was “Squeeze,” an animated orange, based on the site’s theme of a fruit-packing house built in the 1950s. Squeeze helped guests find their way to its many different offerings, including basketball, water park, climbing walls, laser tag, boxing, zip lines and more. He had props and costumes for each sport. One of the founding planners for Lindsay brought in “Squeeze” as part of his vision to create a family experience that rivaled Disney for creative ideas. This character worked at the McDermont Center until about 2013, when budget cuts closed it down.

How does it work?

We create the custom character based on artist’s drawings, and then build a computer animation system using the performance animation software, equipping it with all the essential controls, audio and video components necessary to connect it to our client’s video display system. We also provide the training and installation services. There are many advantages to using the CHOPS Digital Puppeteer system at theme parks and FECs – the low cost of entry and operation, easy creation of custom characters that can be used for promotions as well as entertainment, reliability (no service calls at either of our customers’ sites in five years), creating an experience for guests that is memorable and fun, and that can pay for itself with merchandise sales.

Who is it for?

The Digital Puppeteer system is for both large and small family entertainment centers, zoos, aquariums, museums and theme parks where families gather for recreation and fun. Since characters can be presented many different ways using video display technology, we are available for creative consultations and can develop complete shows or integrate our work into digital signage, if requested. Our background in staging live animation experiences will assist project designers and developers every step of the way to creating a highly successful park experience that will be nearly maintenance-free.