It’s called the “Nixon Effect” for the first character we tried, and since then, it has been used successfully to come up with custom characters while avoiding the stiff costs of 3D artwork. 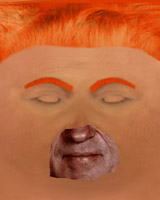 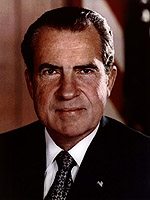 We started out with a publicly available portrait of Nixon on the left, and by working with the digital photos, we mapped his lips and mouth onto the texture map for CHOPS. Then we made a “hole” in the picture where CHOPS mouth could be lined up to speak.

Cut and paste a portrait to make it talk 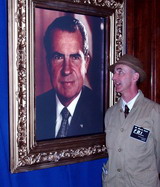 The quality of the professional photography can be important when it comes to this effect. Good images have good strong eye contact and are well-lit, for the most effectiveness. The image above on the left is the photo we got from stock files and the image on the right is a portion of the CHOPS texture map with the mouth lined up to match CHOPS’ mouth. Then we cut a hole in the portrait, put it on the overlay layer and show just CHOPS’ new mouth behind it.

The effect is a little weird and funny, when the perfectly still photo portrait starts talking and interacting. At this private party where “Nixon” was booked, the party planner provided a gilded frame mounted onto a flat panel plasma screen, surrounded by a blue drape. An actor hired to be a front man dressed up as “Deep Throat” to finish off the presentation. The theme of the party was “Politically Incorrect,” and Nixon’s office was “bugged” with inflated insects.

Nixon comes alive with an old speech to demonstrate this effect

In order to make this clip, we played an old Nixon speech and let our system do the lip sync from the sounds of the voice, automatically. 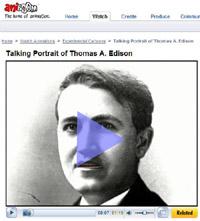 Gary Jesch provides the voice for Thomas A. Edison’s portrait in live animation, in a variation of the same method. Some call this the “Clutch Cargo” effect as seen on Conan’s Late Night Show, however, for us, there is no video studio or camera equipment involved.

This method allows us to provide unique characters without having to develop them in 3D Max, and incurring the costs of modeling, rigging and animation. In most cases, we can include the costs of developing this in the overall performance fee. Another interesting aspect of this presentation is how we can use a plasma or LCD screen mounted on its side in “portrait” mode, creating another look for a standard video display.

Puppeteering is also very easy, since there are no movements or eye tracking to do, and only a few expressions where the mouth action is showing some emotion.