Brash and several other avatars appeared on the Cadillac of remote telepresence devices, the Beam Pro by Suitable Technologies of California, at the 2014 Dreamforce exhibit hall. 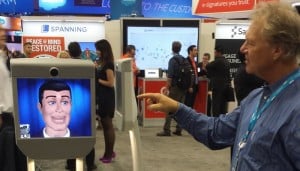 Gary operated the Beam remotely from his office in Nevada and appeared on the trade show floor in California, able to move around, visit booths and say hello to exhibitors and attendees.

After a little training to become a Beam Pilot, Gary made the next step of adding his avatar technology to replace the typical Beam video webcam display with a live stream from his animation system.

GET THE DEMO OF THE BEAM

Using two computers with the live animation system connected to his desktop system via a video capture card and a piece of video switching software, he now brings any character to life on the Beam display. The Beam software allows him to navigate the Beam, as well as see and hear people around him. He can also do live demos using a Beam at a museum in San Francisco.

CHOPS customers can easily arrange to use Beams in trade show booths and at special events, through our company. We will connect you with staff at EventPresence who will rent the devices, help with the internet connections and assist us in putting our avatars on their equipment in your booth. It’s a great way to attract attention that goes beyond the typical video display.

BEAM ME UP LIBBY!

At Dreamforce, Gary and Dana performed as Digital Dan and VirtuaLibby, and presented two characters on the Beam, which picked up a lot more attention. One of the exhibitors there made sure they were interviewed on the event’s red carpet. It’s also a great way to get press attention and attract those who want pictures for social media.

It would be normal for us to provide our brand ambassadors with the Beams, so that they can assist people in the interaction with the avatar. There are a couple of benefits to the Beam, in that Gary can perform remotely so there is no closet space required in the booth, and the Beams can move around the edge of the booth without any cabling or hindrance, increasing the flexibility of putting them where the traffic will stop. Then Gary and his team can begin the process of qualifying those who would become eventual leads. It’s a technology that hasn’t been seen at any other trade shows yet. 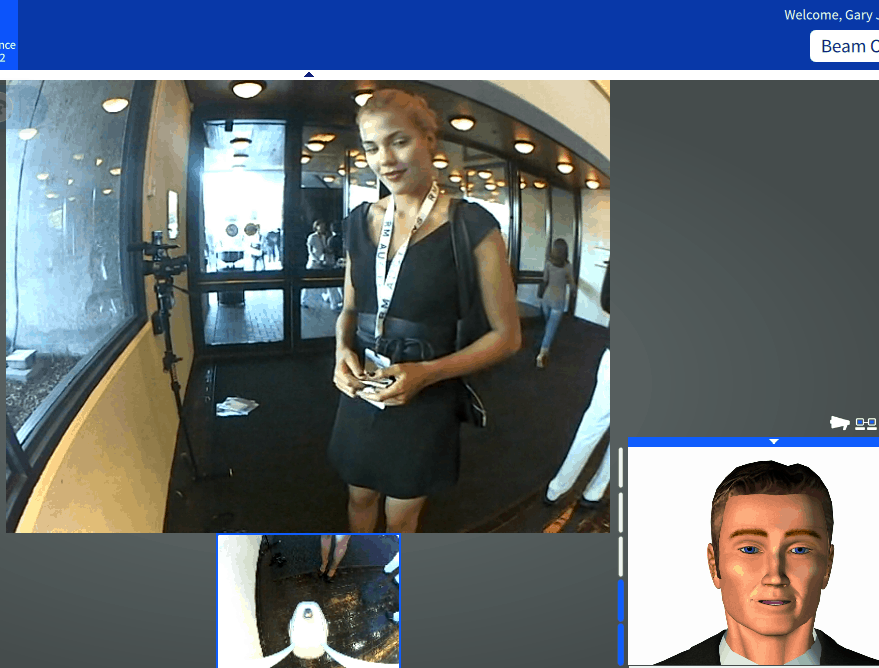 At the Monterey Convention Center, Beam’s remote presence for events was represented by a visit from Digital Dan, who was there driving his Beam in the lobby, meeting guests and networking. One young lady, Julia – a model working in a booth in the exhibit hall, was captivated and spent more than half an hour visiting with Dan. Or maybe she was just a little bored by all the other exhibits that didn’t have avatars. This image was a screen capture taken by Gary, of the Beam’s control screen. The Beam has two cameras so the pilot can avoid running over people’s feet.